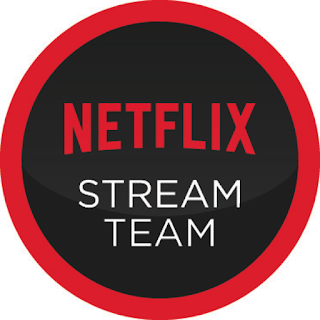 For those of you who have children going to school you will know only too well how nice it is to have a regular routine in your home and hopefully, just hopefully some extra "Me" time! While our home has always been great for a routine this year with the addition of my son beginning pre-school it means our two little ones are very tired in the evenings and are asleep in no time. And children who are quick to sleep can only mean one thing - Netflix! So here's just a sample of what myself and my husband have bee enjoying to watch.

From the first episode both my husband and I were hooked. Narcos is Netflix's new crime drama and it launched on 28th August. It is based on the true story of Pablo Escobar and his fellow drug kingpins of the late 1980's. Pablo is considered the worlds richest criminal and when you watch Narcos you will see how!
Within minutes of watching this we were hooked. It is a raw, gritty series and it details the efforts of the various law enforcement's to control the cocaine industry and also to take Escobar down.

As much as Escobar is a criminal you have to admire him for the lengths he went to to prevent being found out for who he truly is. We are due to begin episode 5 and I'm really looking forward to it.

We are only about half way through Season One of the Killing. Within Season One it covers the first two weeks into the investigation of the murder of a local teenager Rosie Larsen and the various storylines that interlink.
Tim Goodman a Hollywood reporter reviewed The Killing as being "excellent, absorbing and addictive when each episode ends, you long for the next—a hallmark of great dramas" . I must say I'd have to agree. For me too, it leaves me thinking about what has happened and of course trying to work out the various storylines.

Season 4 and the final season was released on Netflix 1st August so for us we've a lot of catching up to do! 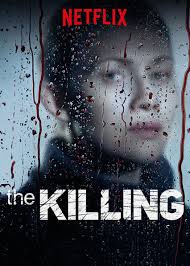 This is my own guilty pleasure. When I want to just have 100% me time I pop on Pretty Little Liars. The storyline is about best friends Aria, Emily, Hanna and Spencer who grew apart after their ring leader friend Alison goes missing. A year later is where the story really begins and the girls receive messages from "A" who threatens to reveal their deep dark secrets!
Like all dramas based on teenagers there are twists and new discoveries and I really am enjoying following along. 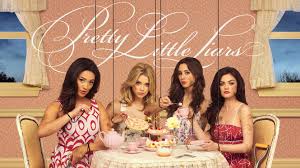 For you, what are your Netflix favourites? Have you watched Narcos? The Killing? Or Pretty Little Liars yet? I'd love to know what you think if you have.

Disclaimer:
I received a Netflix subscription and an Apple TV from the Netflix Stream Team. All views and comments are my own

Posted by Chirps from a little red hen at Monday, September 07, 2015