A carved Pumpkin? Or a Jack O'Lantern?

If I'm honest before our children arrived Halloween as an adult meant as soon as we got home from work we freshened up and went back out again to avoid answering "Trick-or-Treaters"! .... hanging head in shame! When our son arrived this all changed and I suppose it reignited our love of Halloween and its traditions! 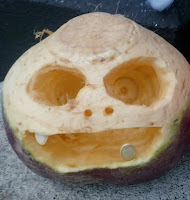 So today I'd like you to meet our turnip! Yes a turnip! My husband came home from the shops yesterday with additional pumpkins and a turnip! If there is one thing I love about my husband is his knowledge of many thing and seemingly a turnip is a tradition for Halloween in Ireland!

So to reel it back a little where did it all begin? Within Irish folklore, a man called Jack O’Lantern was sentenced to roam the earth for eternity. According to legend a man called Stingy Jack asked the devil for a drink and he managed to convince the devil to change into a coin to pay for these drinks. Jack wanted to keep the coin so he kept it in his pocket beside a small silver cross to stop the devil from changing back. 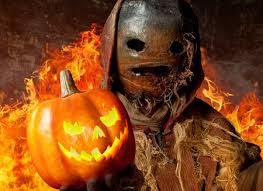 After some time, Jack decided he'd set the devil free but only if he agreed not to bother him for a year and that he wouldn't take his soul when he died.  The year passed and and Jack somehow once again manged to trick the devil. He convinced him to climb a tree to get him a piece of fruit. While the devil was in the tree Jack carved a cross in the trunk so he couldn’t come down unless he swore not to bother him for another ten years.


When Jack passed away, God would not let him enter the gates of heaven nor did the devil allow him to enter into hell. Instead Jack was sent into the eternal night carrying a burning coal inside a carved out turnip which would light his way as he roamed the earth. Stingy Jack became known as “Jack of the Lantern,” which became “Jack O’Lantern.”

From this legend people in both Ireland and Scotland began to create their own versions of their "Jack O'Lanterns". These were carved out of turnips, beets, and potatoes and placed outside their homes to scare Stingy Jack and any other roaming spirits. When this became a Halloween tradition, the lanterns were used as as guides for people dressed in costume on Samhain (Oct 31 – Nov 1) . Samhain is a traditional Gaelic version of Halloween. This is seen as a night when the divide between the living and the dead is very thin. The Samhain festival marks the end of the harvest season and the beginning of winter, the “darker half” of the year. 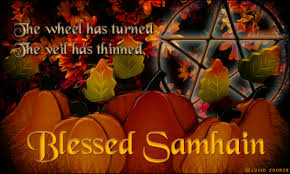 When the Irish and Scots emigrated to America they brought with them their traditions and Jack O'Lantern was one of them.They felt that pumpkins which are native to America were perfect fruits for carving and since they have become a big part within Halloween traditions.

The original turnip carvings were quite grotesque and if you check here you will get an idea of some of the varieties created! 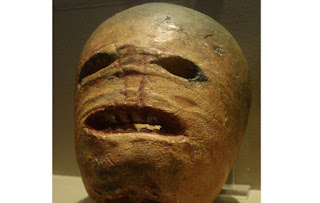 This 19th Century Jack O'Lantern which was made with a turnip is on display Museum of Country Life in Castlebar, Co. Mayo

So as the people don't think we have totally lost it, lol! Here are some of our pumpkins that my husband drilled ...... no carving in our house! 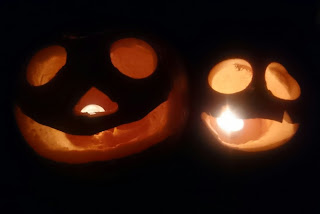 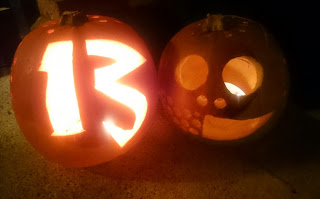 Data was researched from Irish Central and

Email ThisBlogThis!Share to TwitterShare to FacebookShare to Pinterest
Labels: Crafts