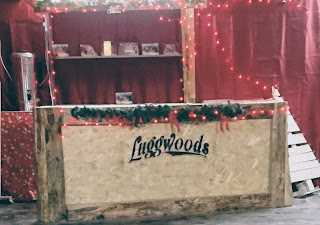 Yesterday we were invited to visit Santa's Enchanted Forest at Luggwood's and I must say we weren't disappointed! 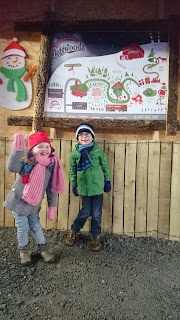 Neither Logan or Elise knew where we going so when we arrived and they saw the festive lights and signs for "Elves at play" there excitement levels soared knowing then they were meeting the main man Santa!

Before boarding the train to go through the enchanted forest Logan and Elise got their faces painted by some helpful Elves and after that our journey began! The Elves greeted us and welcomed us on board the train and from that moment on the children were entertained and drawn in by the magic of Christmas.

As we journeyed on the train, there was singing and fun with the Elves, the waking of the fairies and the saving of Christmas! When we arrived at Luggwoods barn we were greeted by none other than Mrs. Claus! We gathered inside to listen to her stories, saw the Elves workshop and danced with them on stage! 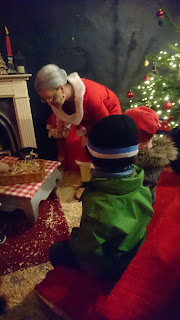 From there, there was more singing and we entered another room to get ready to meet Santa. As we waited we wrote and posted our letters to Santa, got a pic with the Elf on the shelf and there was Hot Chocolate and Santa's sleigh where you could also have a picture taken.

The time came for us to meet the main man and both Logan and Elise were so excited. For us, it was big deal for Elise meeting with Santa as she has a big fear of beards (as per hubby, it's known as pogonophobia!). This year she began to get over her fear thanks to her godfather so for her to go in and high five Santa with ease made it for us!
We got to have a few minutes to chat to Santa which was lovely and of course Logan and Elise received a gift. 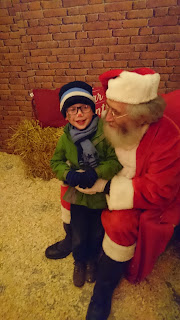 When we said our goodbyes to Santa, we were led by the Elf, out towards a room where the children were entertained with a disco and we collected our family photo with Santa before boarding the train back.

To quote Logan on the way home "I didn't like it, I loved it" and I must say, I have to agree! It was such a lovely experience for all of the family and I look forward to seeing how Elise gets on with Santa next year ;-)


The whole experience lasted about 90 minutes and from start to finish the children were entertained throughout!

If you haven't booked your visit to Santa yet, follow the link here
to book your families ticket at Luggwoods.

Disclaimer: I was invited to Luggwoods as a guest and all views are my own